What Is the Submitty Autograder?

The Submitty Autograder is the component of Submitty responsible for compiling and executing student code and comparing its output to an instructor’s solutions. The autograder has three components to it:

The Life of a Submission

A submission begins its life when a student clicks the “Submit” button on a gradeable. From there, the submission’s files are uploaded onto the primary machine, and a queue file is placed in the autograding queue folder. This queue file identifies which submission should be graded as well as when it was placed in the queue.

The scheduler periodically polls the queue folder for new jobs. When the scheduler finds jobs in the queue folder, it takes the oldest jobs and moves them into the shipper directories of workers which are currently idle (not grading any submissions). Once there, each queue file waits to be sent to the worker by the shipper. 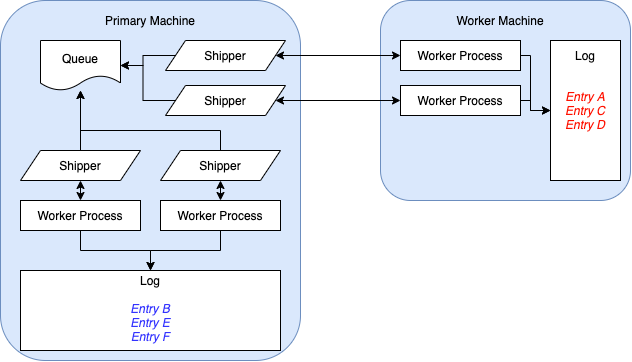 The diagram above is a snapshot of the state of the Submitty Autograder when I joined Submitty back in Fall 2019. Two things stand out about this design:

Not visible in the diagram is the maintainability of the system. The autograder had grown organically over several years and, as a result, suffered from some maintainability issues, particularly on the shipper end. Functions were very long and their functionality was difficult to grok. Making changes to the code was a very fear-wrought process, as the autograder code lacked unit tests, so any small change could introduce a very subtle bug that wouldn’t be caught by the site integration tests. Thus, my Master’s Project aimed at tackling this issue. My contributions to Submitty can be summarized like so:

Originally, there was no true autograding scheduler – any “scheduling” that happened was a byproduct of the shippers’ original algorithm, summarized below:

Although this works, this has the potential issue of bottlenecking very easily since at any given moment only one shipper can check for new jobs. This is particularly noticeable on a system where the Submitty primary machine has slow I/O. Furthermore, the decentralized nature of the scheduling behavior limits what kinds of smart scheduling are possible.

PR #4745 modifies this behavior so that scheduling decisions happen on the same thread that monitors the shippers. Each shipper now queries its own private directory, so filesystem locking is no longer necessary. Furthermore, scheduling happening on a centralized process adjacent to the shippers means that it is easier to modify the scheduling behavior. The image below showcases the autograder’s structure after the changes made by this PR. Note the new “scheduler” node and how it pushes jobs to each shipper node. 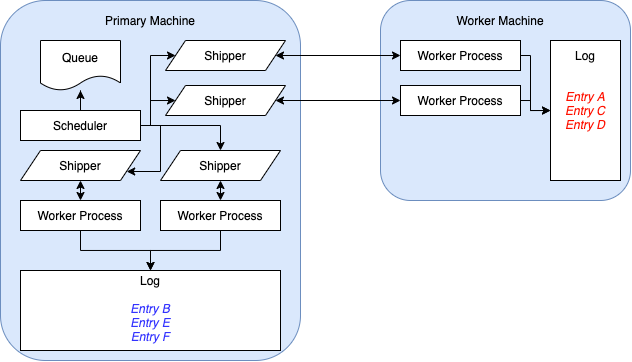 The Submitty autograder writes two different types of logs: regular logs, and stack trace logs. Regular logs simply provide transparency into how the autograder is currently running, whereas stack trace logs report major errors that occur. The Submitty primary machine and each of the worker machines keep their own independent copies of both logs. This means that inspecting the logs when autograding failures occur can become a bit of a hassle, as it may be necessary to log into one or more worker machines to find out what went wrong.

PR #6062 revamps the autograding logger interface so that stack trace logs are replicated in a central location (the Submitty primary machine) when possible. The worker keeps track of all calls to the “log stack trace” function, and stores this record in its results file. When the corresponding shipper receives the results file and discovers that the “log stack trace” function was called on the worker’s end, it reproduces those entries in the primary machine’s stack trace log. The image below showcases the state of the autograder after pushing this change. Note how the primary machine now also includes logs from the worker machine, respecting the order with respect to the worker machine. 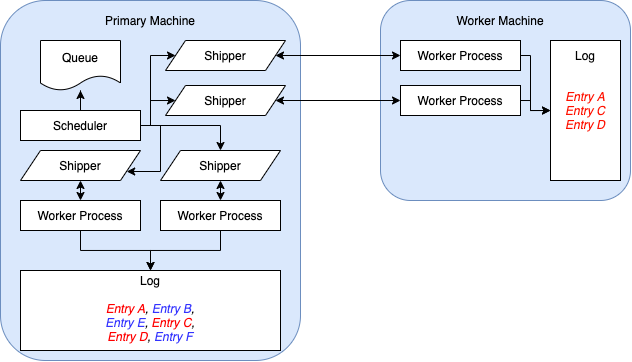 Currently, if a submission suffers from some kind of autograding-related error, the student receives a message stating “Something went wrong with this submission.” This is admittedly not a very helpful error message, and figuring out the source of the error usually involves an administrator looking through the autograding logs to figure this information out. The goal of the tentatively-named “Student Logs” feature is to provide extra feedback to the user on autograding failure so that narrowing down the source of the issue is a more streamlined process. For instance, if autograding fails due to a Docker misconfiguration in the gradeable, this information can be propagated to the instructor much more quickly.

PR #5323 introduces autosaving to notebook gradeables. This is part of an ongoing initiative to help reduce the load on the autograder when notebook gradeables are used for distributing exams. Students may submit multiple times to these gradeables as a method of saving their progress. Notebook autosaving is local-only, but it helps safeguard a student’s exam progress from potential catastrophe (e.g. a browser crash) without having to use up the worker’s available compute for results that are ultimately going to be discarded anyway.

PR #6175 introduces a new “graded by worker” field to the autograding results page. Although minor, this tweak can significantly help gradeable debugging time when dealing with heterogeneous sets of workers. For example, consider a setup with two workers A and B set up to grade graphics assignments. A and B have different graphics cards, and as a result might have slight inconsistencies in how they render graphics. Because of these inconsistencies, one student might lose points when grading on worker B, but not when grading on worker A. Displaying which worker machine graded a submission helps with debugging these instances, as it is no longer necessary to dig deep into the autograder logs to figure out which worker graded a certain submission – this information can be provided directly by the student.

PR #5867 introduces a suite of generic “copy/delete” functions to the autograding shipper that decide based on the destination hostname whether the file access should be done via the operating system’s regular local file management functions (for managing files on workers running on the primary machine) or via SSH (for managing files on remote workers). This helps make the surrounding code easier to understand, as the functions where these file management operations occur are shorter as a result and easier to understand. The table below shows the line counts of the refactored functions before and after the refactor.

PR #6264 modifies the setup scripts for the development VM environment so that the sample courses have multiple capabilities associated with them. This lays the groundwork for more sophisticated testing of the autograding infrastructure.

PR #6191 introduces unit tests for the autograding scheduler, while also refactoring the scheduler’s behavior into its own separate class following a specific interface. Unit tests for the scheduler help improve our testing coverage of the Submitty autograding infrastructure, whereas refactoring the scheduler into its own separate class lays the groundwork for more configurable autograding scheduler behavior. For example, one administrator may want to preserve First-Come-First-Serve scheduling, whereas another administrator in a different institute might prefer some other scheduling algorithm.

Scheduling and the Thursday Problem

The current scheduling algorithm used in Submitty is a very simple first-come-first-serve algorithm. While it is “fair” in a sense, issues arise when it comes to mixing and matching different classes. This manifests in something I like to call “The Thursday Problem:” at RPI, one of the introductory Computer Science courses, Data Structures, schedules homeworks weekly to be turned in by the end of day on Thursday. As it is an introductory course, there are hundreds of students enrolled in it at the same time. This means that every Thursday, Submitty gets flooded with hundreds of Data Structures submissions as the midnight deadline approaches.

At the beginning of the semester, this can pose a minor annoyance to students taking higher level courses, such as Operating Systems. In these higher-level courses, homework code tends to be more complex and as a result takes longer to grade, although there tends to be far fewer students in these courses and homeworks are far more spread out. This means that students of these courses who find themselves in the unfortunate position of submitting on a Thursday night will get caught in the flood of Data Structures submissions and may find themselves waiting several minutes until their submission begins grading. This becomes more and more of an issue as the semester goes on – Data Structures assignments become more complex and therefore require more time to grade, which means our hypothetical Operating Systems student could be waiting for over half an hour for feedback if they’re unlucky.

Because of this, it would be interesting to experiment with various different scheduling algorithms in order to make a system that’s perhaps more “fair” in a different sense of the word. Furthermore, a more sophisticated algorithm could help overcome some trickier constraints. For example, a worker might have the computational capacity to grade mutliple small assignments or one big assignment. How “heavy” an assignment is is not something that the scheduler currently takes into account.